The Italian countryside blurred by as I dropped two gear and passed an Audi as if it wasn’t even moving. With 602 horsepower at my disposal and the wide open roads of Sant’Agata, Italy, ahead, an afternoon of adventure awaited. I was fortunate enough to pick up a Lamborghini Huracan LP610-4 to review from the Lamborghini factory in Bolognese, here are my thoughts and experiences.

In 2014 Lamborghini released the Huracan as the next generation to replace the renown Gallardo. The Huracan is powered with a 5.2 liter naturally aspirated V10, the same engine found in the R8. As indicated by the 610 in the model name, the car produces over 600 horsepower while delivering it to all four tires (denoted by the dash 4). 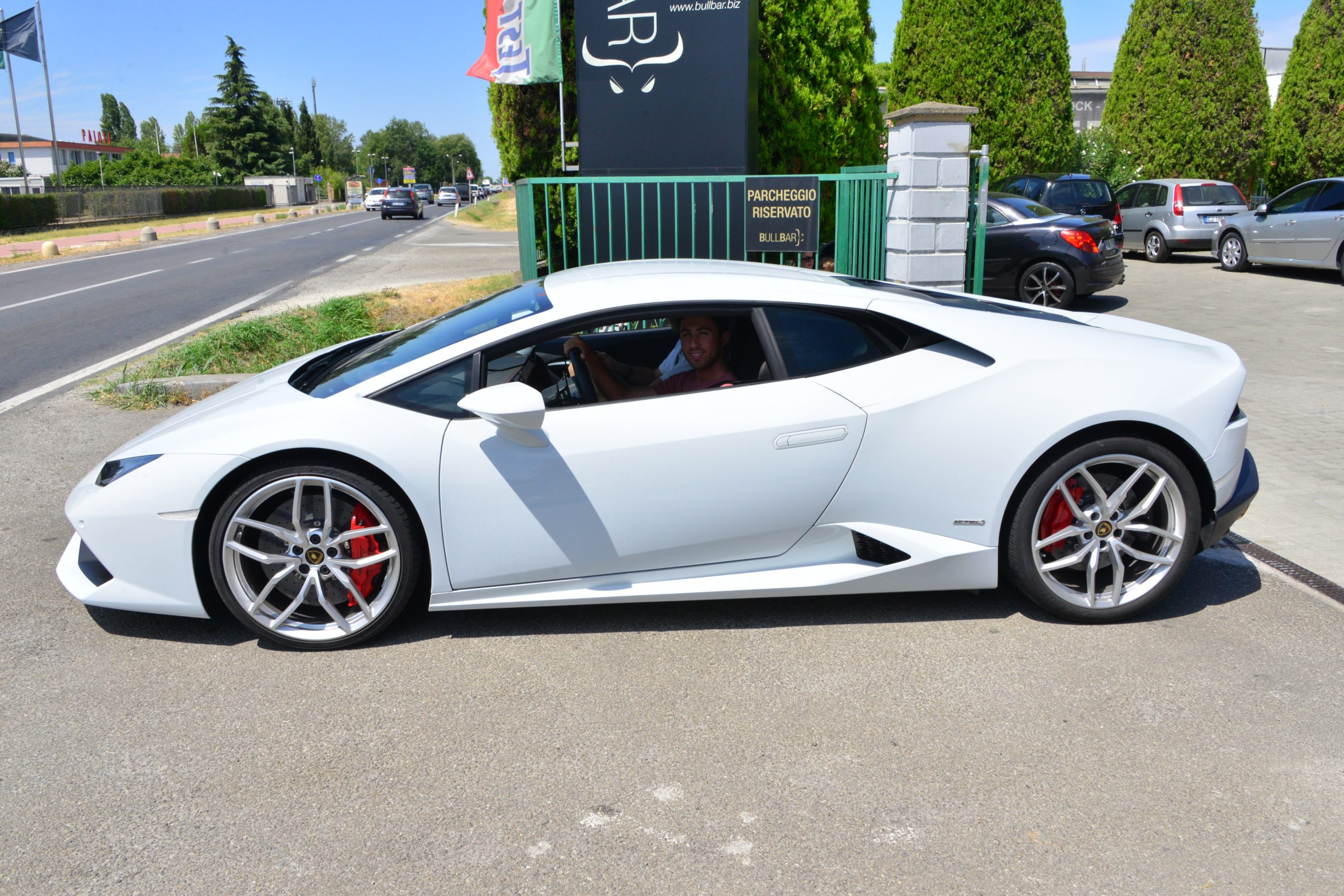 The Huracan I was behind the wheel of was painted in balloon white and featured a full Alcantara interior with red stitching, coming in a price nearing $260,000. The Alcantara option is a must have in my opinion, as it adds another level of elegance while offering better grip in the seats.

Reminiscent of a fighter jet, the styling of the LP610-4 is angled and aggressive. Every edge appears to be designed for speed and reduced drag, which it has. From every angle the car appears menacing and screams to go fast, fortunately it has the systems to fulfill its demands.

Unlike the Gallardo, the Huracan benefits tremendously from a 7 speed dual clutch transmission that offers both civilized shifts when driving subdued, as well as neck breaking gear changes when it’s time to go. The three different driving modes (Strada, Sport, and Corsa) also determine the speed and violence of the shifts. 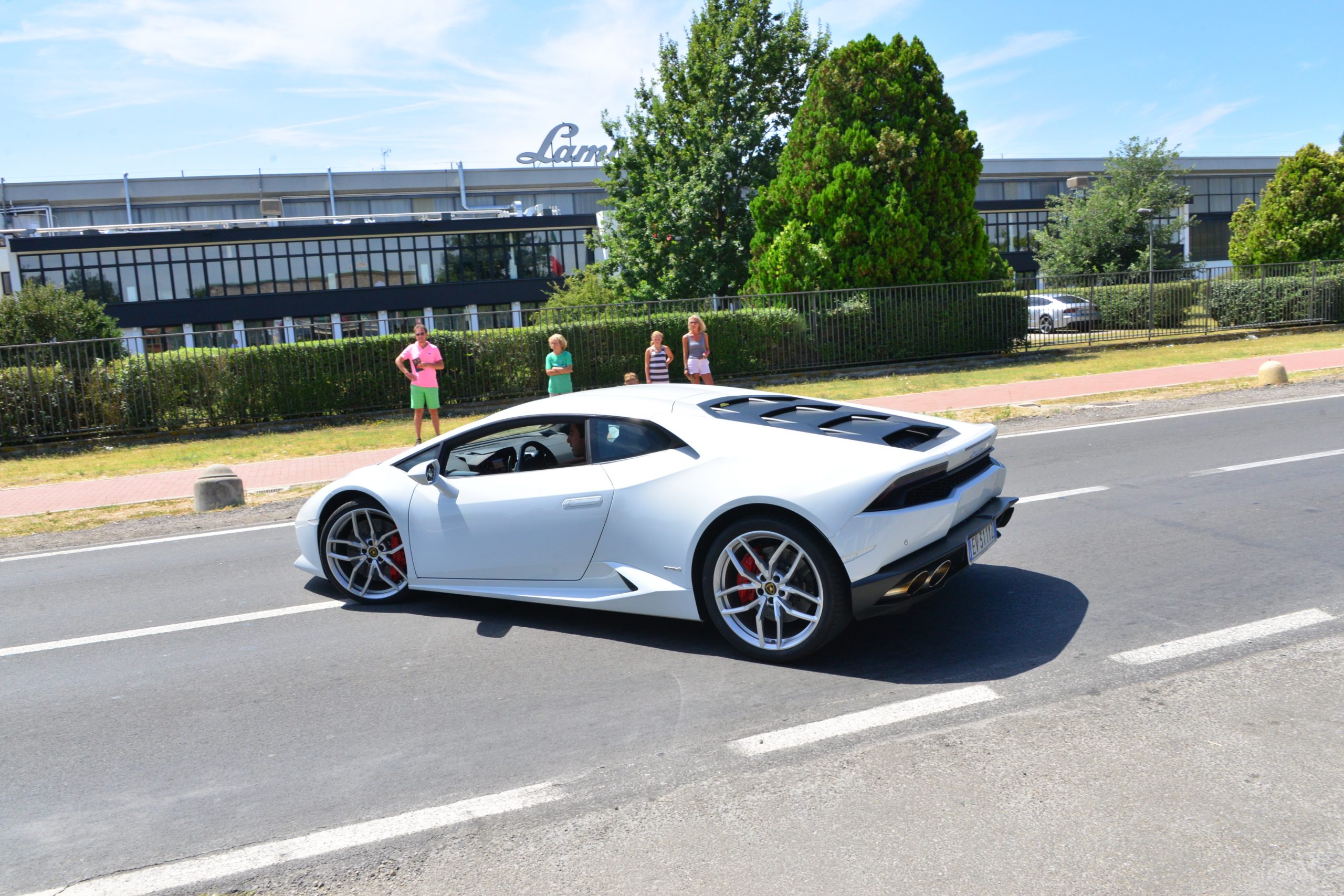 The Sant’Agata country side is made up of straightaways, bumps, curves and roundabouts, so I was able to put the Huracan through its paces. The carbon ceramic brakes gave me the confidence to come out of a triple digit straightaway and right into a banking turn. The car felt as if it was glued to the pavement through tremendous downforce. As the apex would approach, the power was instantly there when I rolled back on the throttle.

Lamborghini’s MagneRide electromagnetic suspensions system proved beneficial while going over older cobble stone roads in-between towns. I could see myself daily driving a Huracan as the ride is not harsh and the car does not always need to be aggressive…however you’re always just a few paddle clicks away. When I wanted to have a conversation, all I had to do was up shift to gear 6 or 7 causing the noise levels to drop considerably.

This Huracan was also equipped with the optional front lifter system that makes going over inclines and speed bumps more management, however I did not have the need to use it. The braking power of the car is absolutely immense, 70 to 0 mph will happen in just 144 feet.

I’m at a loss of words on how to describe the sheer speed that this Lamborghini outputs. With or without launch control, the torque will have a full body effect that may cause you to forget to breathe for a few seconds.

All in all, the Lamborghini Huracan LP610-4 will exceed nearly any expectations that you have while setting the bar at a new level. The Aventador is a superb car, but why spend double the money when the Huracan provides everything and then some? As many car enthusiasts believe, this will be the last generation of naturally aspirated engines, which is truly a bummer, but the legacy will always live on in the Huracan. I look forward to the day when I have a 610-4 sitting in my own garage.

By the end of the day I was not sure what brought a bigger smile to my face, the downshift crackle of the exhaust or the seat pinning acceleration when the pedal found the floor.